The 12 Days of Christmas

One of the beloved Christmas songs that gets a lot of airtime every year is the song known as the 12 Days of Christmas. It is often rumored that this song was originally a coded reference to the Catholic catechism in order to veil their persecution by the Church of England. Another version of this story is that the song was again, used as a hidden message, but this time between believers in societies where the Gospel was frowned upon or outlawed. According to Snopes.com, however, these are popular rumors that have little to no substance.

There are however, surface truths that we can gather from this song: It DOES concern the 12 days between the birth of Christ and the coming of the Magi (or wise men.) Additionally, it probably grew into a song as a game where competitors would add various verses while repeating all previous stanzas until one player “messed up” a previous line. We DO have record of it as a song as far back as 1780 although it surely is much older than that. It is also believed that the song is of French origin, not English.

What else can we derive from this song? 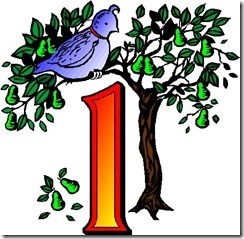 There is a certain “un-ending-ness” that occurs in love.

There is a material way to show and observe love.

There is a “value” in and from love.

Surely, each of these truths are voiced throughout the song. Of course, and I know that I am very prone to spiritualize things … even to over-spiritualize them … but I think there is perhaps even more that we can derive from this song.

On the initial glance, I want to observe the rumored meanings because I do think the song can help us to understand various aspects of our relationships with God and with fellow believers.

Perhaps each of the gifts could mentally correlate with teachings of the faith. Immediately, the One known as the “True Love” could refer to God Himself and the one receiving the various gifts would represent the believer.

Other imagery could be represented as follows:
One (a) partridge in a pear tree could represent the one and only Son of God, Jesus Christ.

Two turtle doves could perhaps represent the two divisions of the Bible, the Old Testament and the New Testament.

Four calling birds could represent the message of Jesus Christ as revealed in the four Gospels.

Six geese a-laying could be thought of as a reference to the six days of creation.

I had a difficult time imagining this next one but as I began to look through the lens of Catholic theology, I understood the Seven swans a-swimming as the seven sacraments of the Catholic Church:  Water Baptism, Confirmation, Communion, Penance, the Anointing of the Sick, Ordination, and Marriage.

Eight maids a-milking has been thought by some to note the eight beatitudes found in Matthew 5 as a part of the Sermon on the Mount.

Nine ladies dancing could represent the nine fruit of the Holy Spirit: “But the fruit of the Spirit is love, joy, peace, forbearance, kindness, goodness, faithfulness, gentleness and self-control. Against such things there is no law. (Galatians 5:22-23 NIV.)

Ten lords a-leaping may be used to represent the Ten Commandments, the Foundation that points us toward our need for God and His perfection.

Eleven pipers piping can be thought to represent the 11 apostles who remained faithful to Christ.

And the 12 Drummers Drumming could simply point to the 12 statements of the Apostle’s Creed: (http://www.snopes.com/holidays/christmas/music/12days.asp accessed 12/04/2014.) 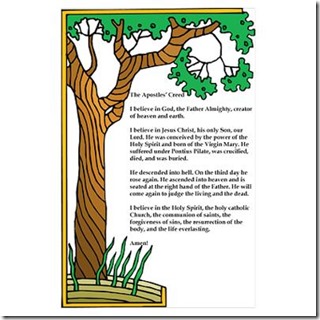 I know that various other methods have been devised for the aide of the remembrance of certain doctrines and other elements of the Christian faith. Many have used songs, poems, even decks of cards … so why not use the song, the 12 Days of Christmas as a device to remind ourselves of various aspects of our faith. And this Christmas, while we focus our attention on Christ as the infant, let’s also remember that He is the Risen Lord and the Conquering King and that He has surrounded us with a whole multitude of examples, witnesses, and relationships..

Therefore, since we are surrounded by such a huge crowd of witnesses to the life of faith, let us strip off every weight that slows us down, especially the sin that so easily trips us up. And let us run with endurance the race God has set before us. We do this by keeping our eyes on Jesus, the champion who initiates and perfects our faith.[a] Because of the joy awaiting him, he endured the cross, disregarding its shame. Now he is seated in the place of honor beside God’s throne. (Hebrews 12:1-2 NLT)